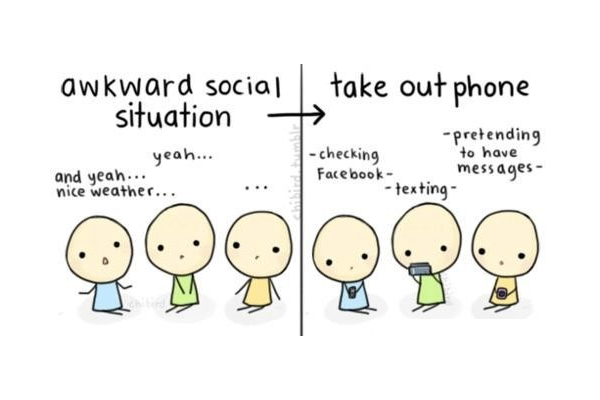 Friendster, MySpace, Facebook, Twitter; it’s so weird that the impulse to share every thought that pops into our head is a concept we’ve only had for 12 years or so. MySpace and Facebook gave us the opportunity to share our cat photos with close friends, but Twitter came along and changed the game when it provided the option for anyone with a phone or computer to follow your life. And while I do love using the interwebs to vicariously keep in touch with friends I don’t often see–and follow greats like Sam L. Jackson–I’ve noticed that with that luxury we put up with some pretty odd social quirks.

About a year or two ago I was at a small gallery opening and out of the corner of my eye I recognized someone. I couldn’t quite pinpoint who she was until I opened Twitter on my phone and realized she’s someone who’s recently started following me, so we’ve previously interacted a bit. Without really thinking it through, I went up to her and with much enthusiasm exclaimed, “Hi! I’m Esmeralda… we follow each other on Twitter.”

‘Til this day I can’t quite pinpoint what her look exactly was, but I’ve concluded it was a toss up between disgust and embarrassment.

She gave me the look, turned around and awkwardly shuffled away. And after feeling slightly offended, I realized that she wasn’t completely in the wrong, because Twitter doesn’t equate to an automatic friendship or even a smooth introduction, even if you follow each other and exchanged a few tweets back and forth. But this is an actual situation that will become more prevalent the more online we are, so I expect to experience more Zoiberg-like shuffles.

Expectations are Set Too High

What if the above example doesn’t happen; what if the person does recognize you? Great, now you move on to round 2 of the awkward game, where the person you speak to may not meet the expectations they set online.

Nowadays people are ‘personalities,’ especially when it comes to social media. You’re a brand, and you play up what makes your brand unique. Sometimes it’s being overly excited, being quirky, a smart ass, funny, etc. So it’s always a bit of a downer when you meet someone who appears one way throughout the year online, to a much more reserved version of themselves in person.

And I’m referring to the more severe cases, where someone may have just tweeted “HAVING THE TIME OF MY LIFE WITH @SO-AND-SO!” when in reality both the person tweeting and so-and-so are just staring at their phones, exchanging less than 5 words with one another every few minutes…

These don’t pertain just to Twitter, but they seem to appear more and more on the platform than the others. Whether it’s a “I hate when people don’t reply to emails when I clearly see them tweeting,” to the more direct/indirect talking about someone by name but leaving out the ‘@,’ active passive aggressiveness has evolved from the soft spoken snarks and side glances of yesteryear.

The mute button, a feature introduced to Twitter not too long ago because the company itself acknowledges this is an actual social dilemma: Feeling forced to follow an individual/keep following someone, even when you don’t want to see their status updates on your feed.

Maybe these individuals tweet too much throughout the day, or you don’t really know the person all that well except for that one time you spoke at a PAX party, or you actually despise this person to your very core but need to keep that network relationship alive.

Whatever the reason, feeling forced to continue to follow people on Twitter is an actual situation people often find themselves in, which is somehow worse than unfriending someone on Facebook. Facebook it’s because I no longer want to see pictures of your newborn baby who I secretly think isn’t cute, but with Twitter OH HELL NAW IT’S ON BECAUSE YOU DON’T WANT TO KNOW WHAT I ATE LAST NIGHT SO IT’S VERY PERSONAL.

I’m sure I’ve alienated every person who’s reading this so I’ll make my way to ‘Ello now. Or worst yet, Google Plus (shudder).